What Is the Yukon Quest? 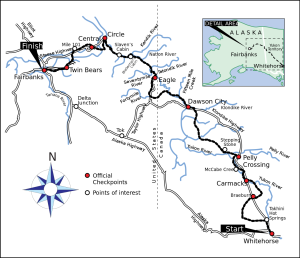 The renowned Yukon Quest is a 1,000 Mile International Sled Dog Race, named for the “highway of the north,” which is made up of the Yukon River and the land routes historically used by prospectors, adventurers, and carriers of mail and supplies between the Klondike gold fields and those in the Alaska interior.

As early as 1976, mushers discussed holding a sled dog race from Fairbanks to Whitehorse. Then, in 1983, mushers Roger Williams, Leroy Shank, Ron Rosser, and William “Willy” Lipps, gave life to the idea in the Bull’s Eye Saloon in Fairbanks, Alaska. 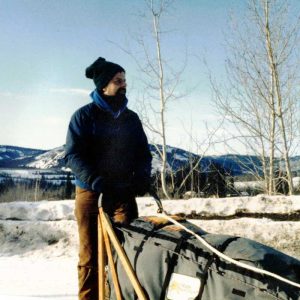 David Monson, the owner of Trail Breaker Kennel and Yukon Quest Veteran, has raced in the Yukon Quest multiple times,competing in both the 1000-mile and 250-mile races. His first Yukon Quest 1000 was in 1987, and his last race was in 2002. In each race Monson participated in, he finished the race in the top 5.

Today in 2023, the race looks a little different, with two separate races held in the US and Canada, with neither currently hosting a 1000-mile race. In Canada this February, The Yukon Quest begins in Whitehorse of the Yukon Territory. In 2023, from Whitehorse, there will be a 100-mile race to Braeburn, a 250-mile race to Pelly Crossing, and a 450-mile race to Dawson City.

The Yukon Quest Alaska also hosts races in February of 2023 from Fairbanks, Alaska. They, too, have three different races, including a 550-mile, 300-mile, and 80-mile race. Trail Breaker Kennel’s guide and reservationist Katrina Handler as well as Abby Klager, friend of Trail Breaker Kennel, will have a team in the 80-mile race this year.

Ensuring the Sled Dogs Are In Good Condition

Because excellence in sled dog care is one of the founding principles of the Yukon Quest, all sled dogs participating in the Yukon Quest must receive the highest standard of care.

Two weeks before the start of the race, all mushers’ food and equipment must be organized and brought to the designated drop-off. Mushers mark their food drop bags (one for each checkpoint) with their name and the checkpoint’s name. The bags must not exceed the weight limit of 40 lbs/18.2kg. The Yukon Quest then distributes these bags to the checkpoints for mushers to retrieve throughout the race.

One week before the race starts, dogs entered in the race undergo a complete physical exam at the Official Vet Check. This checkup ensures all dogs participating in the Yukon Quest are in proper condition to complete the up to 1,000-mile sled dog race. This is just the first of at least six examinations each dog will receive from Yukon Quest Veterinarians before they reach the Finish Line.

Checkpoints Along the Route & What They Mean

In addition to the Race Checkpoints, five vet stations are situated along the race route. They provide opportunities for professional veterinarians to monitor each dog’s well-being throughout the race. If a dog’s condition fails, a musher may need to remove it from the competition. If this is the case, the dog will then be placed in the vet or the musher handler’s care, depending on their condition.

Every musher leaves each checkpoint with a minimum of 8 booties per dog and enough food and equipment for themselves and their team to safely travel to the next race checkpoint. Mushers carry a wide variety of food and snacks for their sled dogs. This food, along with emergency rations and special nutritional supplements, makes up a significant amount of the weight on the dog sled.

Mushers and their dogs are prepared for the coldest weather. They often run in temperatures of -40 or colder. If the mercury rises ( 25F/-4C), mushers may consider running more in the cold of the night and resting longer during the “heat” of the day.

Teams often run and rest around the clock, according to their dogs’ schedules. There are four mandatory layovers during the race, where mushers must stop for designated lengths of time.

During a typical rest stop, mushers:

The mushers may choose to serve their first mandatory layover at either Mile 101 or Central in even-numbered years or at either Braeburn or Carmacks in odd-numbered years. During this first stop, the musher must rest a minimum of 4 hours, allowing Race Veterinarians to examine every dog after the first 100 miles of the race.

Eagle is the most remote checkpoint on the original Yukon Quest Trail, with no highway access during the winter. Mushers must rest there for at least 4 hours.

At the halfway checkpoint in Dawson City, there is a 36-hour mandatory layover. This unique feature of the Yukon Quest allows mushers and their dog teams to rejuvenate before starting the second half of their race. This checkpoint is also the only race stop where mushers can receive assistance.

At the last checkpoint of the race, there is typically a mandatory layover. Race veterinarians examine all of the dogs on every team carefully. They also check in with the mushers to ensure that all race participants are in good condition to run the final race miles. The purse is shared between the first 15 finishing teams.

Get A Taste Of The Yukon Experience In Alaska

Are you ready to know firsthand what it is like to be on the Yukon Quest? Visit Fairbanks, Alaska, and experience the thrill of being a musher yourself or with your family on our Alaskan Dog Sledding Tour or our 30-minute Sled Dog Sampler, or craft your own action-packed experience on a Custom Alaskan Winter Tour.